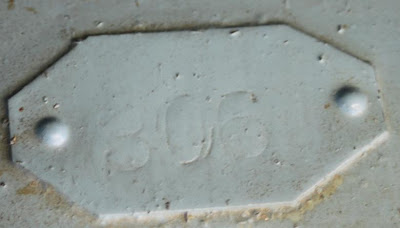 Donald Kofoed was the son of the foreman for Ward & Dickinson. Berthel Kofoed was hired by Ward & Dickinson to design and build the first lunch car built by the company. He was also wise enough to order in bulk to save money. His son, Donald relates that he bought all the wheels from a wagon company who was going out of business. Donald worked for Ward & Dickinson for a couple of years after getting out of college and talked a little about the company.
One thing he mentioned is that there was an ID tag under the bread drawer on each of the diners. Well this weekend, I proved this to be true! Upon entering the Tasty Acre of Chautauqua, outside the entrance of the Chautauqua Institution, I found the owner at the diner. After talking, I noticed that the original drawers behind the counter were still there. After asking to look under them, I noticed an unassuming tag which was painted over. After some cleaning, you can notice the number 306 punched in to the tag! This diner was said to have come to the location in 1944, so there is still a lot more research to do. Did Ward & Dickinson build a new diner? If not, where did it come from and how long was it at the other location?
Hopefully there are other Ward & Dickinson diners that also have their original drawers. The only possibilities I can think of are in Oneida, NY and Middletown, PA
Posted by mike at 9:46 AM