Falling behind already. This month's post comes from Utica, NY. In Utica, there was a Bixler diner that came into town in October of 1931. It is not known where this diner went after this location, as it was shortly repossessed. Utica had a Bixler that lasted into the 1950s on Genesee St., so possibly this is what became of this diner.
This diner was located at 314 LaFayette, and right across the street at 313 was the Elgin Diner. The Elgin was a ca. 1923 O'Mahony that was hooked into a larger building that also housed a bar. The diner may have been called the Wilcroft Lunch at one time also. In the late 1930s, the O'Mahoyn was replaced by a Sterling diner. the O'Mahony was incorrectly identified as an interurban trolley car, even in the 1930s.
Next time, we will look at another Utica advertisement. I will keep the manufacturer's name in suspense.
Posted by mike at 7:12 PM No comments:

Want to buy a diner? 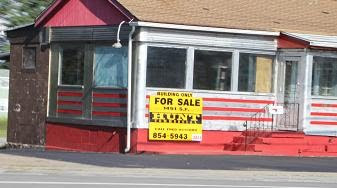 The Rainbow Diner in Woodlawn, just south of Buffalo on NY Route 5 is for sale. We have not checked on the price of the diner, but if you're truly interested, you could call the phone number to the left. The phone number is 716-854-5943.

We also stopped at the Auburn Diner and found a very busy diner. We had not been to the diner in maybe 5 years, so it was log overdue.
Posted by mike at 9:21 PM 1 comment: