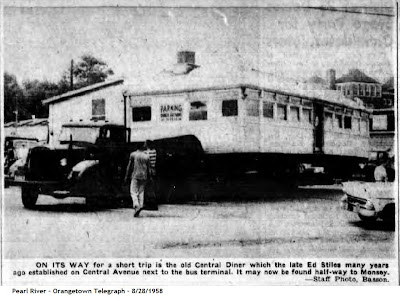 Way too busy with everything else.

Some small tidbits. The Cities Service Diner that spent a year in Dansville, NY around 1939, was moved to Geneseo and the paper reports that it was an old trolley car. It looks like a Richardson dining car came to Warsaw in 1924. Hopefully I can get a better grasp on the history of this diner. Good year for locating former Richardsons as I have located three of them.
A blurb from a DeRuyter newspaper dated 11/12/1903 "Howard and Gross Swan of Linckalen own a lunch car in Cortland and recently had receipts of $100. Howard has half interest in a lunch car in Dunkirk." Also 9/27/1934 " Gold Dome Diner on Erie Blvd West and Thompson in Syracuse, burned down and was destroyed. The diner was valued at $7,500"

Ward & Dickinson News - All I could find on the Modern Diner in Wellsville coming to town is that the diner came from Le Roy in 1933, and there was just a grand opening advertisement. No article, not even a blurb announcing any information.
The W&D in Butler, PA seems to have been called the Blue Ribbon Diner. About 98% confident on this one, as two diners/lunch wagons popped up in the city directory during the time period the ledger places the diner at. The original owner(who bought the diner) was never listed as owning the diner in the it directory, and his address disappeared in the following year, and he disappeared at the same time.
Posted by mike at 6:51 PM No comments: