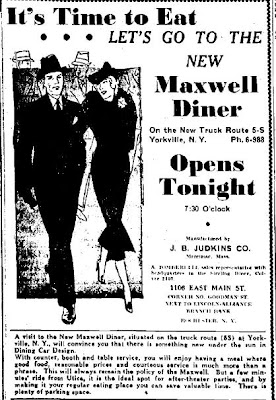 No photo of the diner, but a mention of the builder. So now we know that Utica had two Sterling diners in the area. In fact, there was also a Sterling in Herkimer for some years, known as the National Diner. The National Diner was part of a chain possibly out of New Jersey, but with a regional office in Syracuse. There were four National Diners in Utica at one time and one in Rome. Litle Falls also had a National Diner from the late 1920s.
Next month, we will continue with our look at the diners of Utica with a look at a New York built diner. But probably not the company you would think that I would post about.
Posted by mike at 6:04 PM