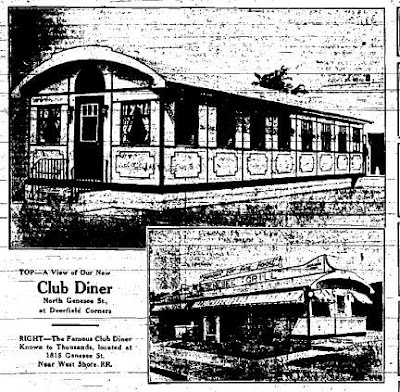 At the same time two Sterlings were coming to Utica, a Rochester Grill also arrived. Shown here is a chain of two diners. The first was a Bixler, and the second was a Rochester Grill. For people in the know, Mr. Shale's name will sound familiar.


He originally worked for Bixler and jumped to Rochester Grills when business for Bixler dried up. It is quite possible he also made furniture and pianos for the Rochester company either before or after (maybe during???) his dining car career.
Rochester Grills was not a prolific company. They were around from late 1935 through about 1940 and we know of about a dozen diners that they built. I was able to discover that two of their employees were from Livonia, NY and the local paper mentioned that this worker went on the road for Rochester Grills about six times, getting the diners in place. The only new piece of information was a Rochester Grill diner sent to New York City. Other Rochester Grills went to places in New York state like Sidney, Norwich, Johnson City, Watertown, Olean and Bradford in Pennsylvania. you can still get light fare at the diner in Bradford, as they have recently reopened the place as a place for food and gifts. "Grandma's House Tea and Gifts" can be found on facebook.
Posted by mike at 7:23 PM