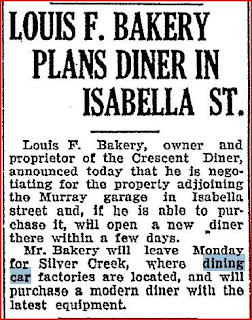 The inaugural post deals with speculation. While speculation and intention do give us a really good view into what could have been, it also throws us down wrong roads. But it also reminds researchers that on occasion, newspapers are incorrect.
This June 1930 newspaper article mentions that Louis Bakery, the proprietor of the Crescent Diner in Ogdensburg had intentions to start a new and grander diner. Some background first. The Crescent Diner was a used Ward and Dickinson diner, numbered 69. The diner was built in July of 1926 and spent about 3 years doing business in Watertown, NY. So this particular diner was a basic 30 foot model. Around the time of this article was published a new Ward & Dickinson, to be known as the Miss Ogdensburg Diner was coming into Ogdensburg. This new diner was a 40 foot deluxe model. Perhaps this new diner was already in town and Bakery thought that he needed a new, larger diner in order to compete with this new diner? Or, maybe the writer had Bakery confused with someone else. Whichever is the actual story, we will never know the true story. But this article does give us a look at a northern New York town and its Ward & Dickinson diners.
Posted by mike at 2:51 PM