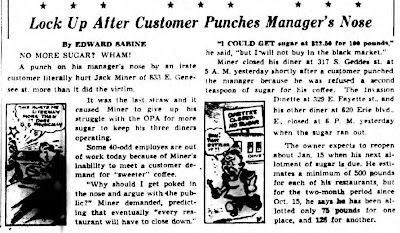 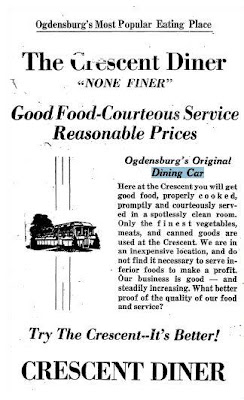 As you read at the bottom of this page, a few things seem a little weird. The diner did not come from East Aurora and the black marble counter does not ft in well with a Ward & Dickinson. Also, a similar restaurant for 3 years would not have been a Ward & Dickinson, so it must be
the J.J. Sharpe built diner that was in East Aurora.

A few more significant pieces of information. Jerge bought another Ward & Dickinson Diner, and that location had a restaurant until 1988. no clue if the diner stayed that long, but by the 1960s, the location became known as a restaurant and not a diner. The "new" diner was #51, which spent a year in Cleveland, as part of a failed chain.
Jerge sold diner #69 to an Ogdensburg party, Louis Bakery(Baking) who called the diner the Crescent Diner. Louis was assisted by Miss Mary Wert and Hoyt Mitchell.

Bakery was in the news in the following year with plans to go to Silver Creek to buy a new diner if he could get a lease on new land. As the diner never materialized, it is believed that the news was premature.

Lastly, back in Watertown, the location where Jerge had this diner originally, would see another Ward & Dickinson known as the S&B Diner. This was run by Lloyd W. Blanding & Clark L. Sherman from appx 1935 to 1962, and would only last 4 more years before being demolished for urban renewal. Lloyd came from Salamanca where he ran another diner, probably a Richardson, since 1924.

PULLMAN DINER TO BE
OPENED AS RESTAURANT


A Pullman diner will be Installed
as a restaurant at 231 Court street
Saturday. It was announced today by
Alvin J. Jerge. proprietor of the car.
The diner arrived here this morning
from East Aurora. coming to this city
by rail.
The restaurant will be equipped
with the latest fixtures and will have
a black marble counter for service.
The car is equipped with an electric
refrigerator and other modern equipment
The value of the car is estimated
at $8,000. A similar restaurant
has been successfully operated
in East Aurora for the past 3 years.
Posted by mike at 6:55 PM No comments: